Ivy may look good(ish) on some baseball park in Boston (or New York, I don't know which, they're the same to me) but it is an insidious cancer in a garden. 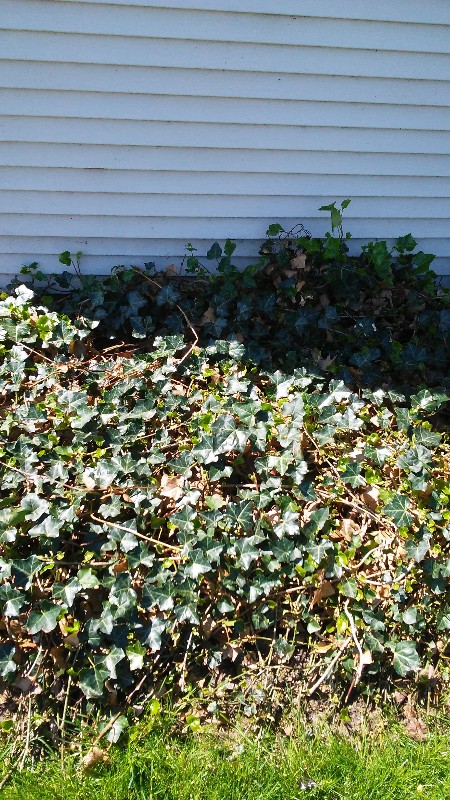 What it looked like before I got here. This ivy bed is along west side and the north side of a 2 car garage. 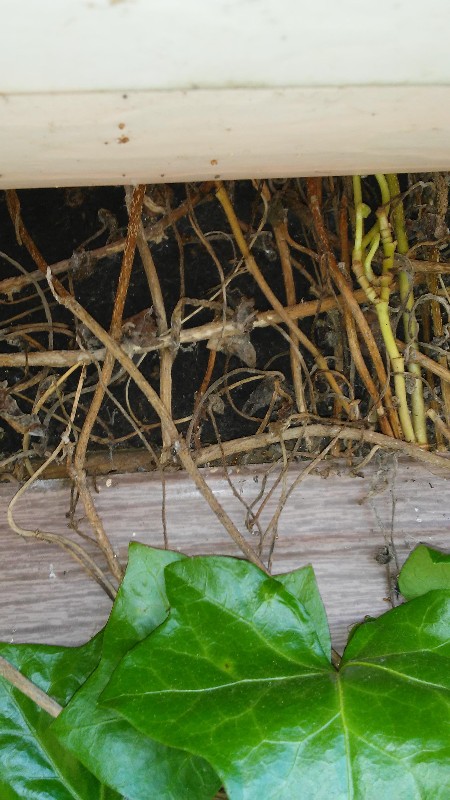 What you didn't see. Here the bottom strip of vinyl siding has been peeled back. The ivy has grown under the starter strip and is now growing between the siding and the sheathing of the house. 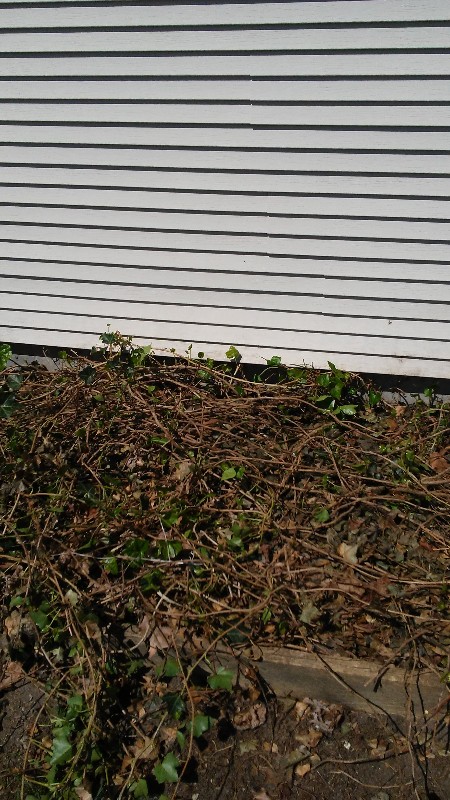 After you pull out the top layer there are almost no leafs but there are miles of vines tangled together and setting roots everywhere they touch the ground.

I now have the west side down to bare dirt. I have rolled back the north side and cut anything going form the ground to the wall.

I say I win round 1 by going to bare dirt. I cede round 2 to the ivy as it will grow back. Round 3 will be me spraying with roundup.

My thinking is there was so much vine and dead leaf layer that it would take gallons of roundup to coat the green leafs and kill it. So I mechanically remove it first and let it spring back. After it springs back I will spray it before the plant really has much time to replenish energy after flushing new leafs.

It appears to look pretty thick and dense there, Mr. Yan ! Hit that Round Up ! Or if I was to use that dirt immediately.. I would put the tiller to em. Get all that root up . Re-plemish with some new soil.

Use a soil sterilizer & then wait a few years before replanting.

My goal is to put 6 or so blueberry bushes along the west side then under plant with strawberries. Possibly put two or three heavily pruned apple trees in there. The northside will be hosta and fern.

If I run a tiller through there won't that just make the problem exponentially worse? All the chopped up root bits will sprout and grow. I could make a second career selling ground cover.

Soil sterilizer sounds interesting but I don't think I want to wait years.

You are going to fight this for years & nothing you want to plant is going to compete with it, let alone thrive, so make it easy on yourself... A few years is nothing & I'm sure you have enough to do at your new place during that time anyways.

Also, you may want to consider planting thouse blueberries somewhere else... They are an acid loving plant & planting them next to a foundation is probably a bad idea, since cement is incredibly alkaline by nature (a pH of 12 to 13).

@w_r_ranch Will the concrete effect the pH that much?

I have not done any testing on this soil but this coastal west Michigan is similar from about Indiana to Petoskey and this includes where I grewup and my grandfather's place. Acidic sandy loam - and it's really sandy too. There are 10 commercial blueberry farms within 5 miles of this house. From Holland MI to Ludington MI has been called the fruit coast by some growers groups.

Anyway onto the spray. What would you suggest - I don't have any application license, ag/farm registration? I looked up soil sterlizer and RM43 popped up and Tractor Supply Co has it on their site. I also don't want something that will leach to my well. I have a 15' deep, or shallow, well about 60 feet from this patch which is used to water my garden.
Last edited: May 31, 2020

Yes the concrete can effect the pH that much... and its been leaching into the soil since the house was built.

Products that contain the herbicides glyphosate, triclopyr, imazapyr or some combination of the three are effective against English ivy. RM43 (contains 0.78% imazapyr) will work, as will Bonide Stump Out Stump & Vine Killer (contains 8.8% triclopyr). You will probably need to treat this area at least 2 times.

Pramitol 25E (contains Prometon) is what I would use... But a license is required.

Pramitol delivered to your door.